Use of UTF8 Unicode data is also shown - some cities have such characters in their names.

JSON text comes from two different kinds of client requests: from an HTML form and also from Javascript/fetch(). The first one uses URL-query POST from a form. The second one demonstrates a request with "application/json" content type and use of request-body to get the HTTP request body.

The JSON parsing demonstrates two ways to do it:

This is the form where you can enter JSON text to be parsed: 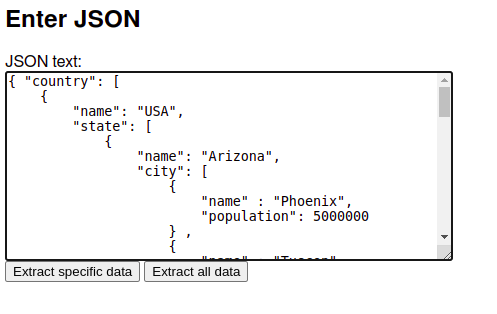 This is the result of submitting as 'Extract all data', where all data nodes are shown, along with their normalized names (that includes hierarchy and arrays), their values and types: 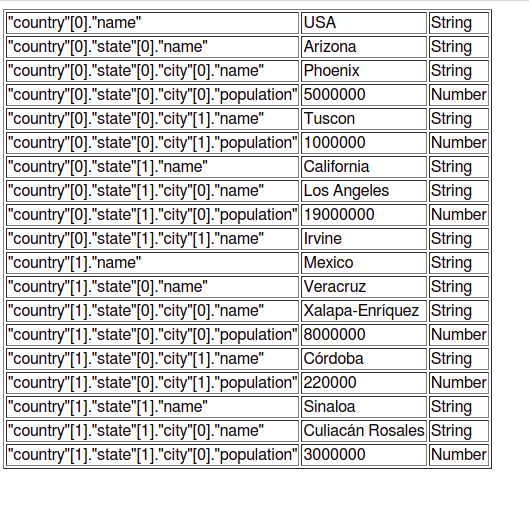 The following is the output of pushing 'Extract specific data' button. Specific data nodes are found, taking into account the hierarchy of data, and their names and values displayed: 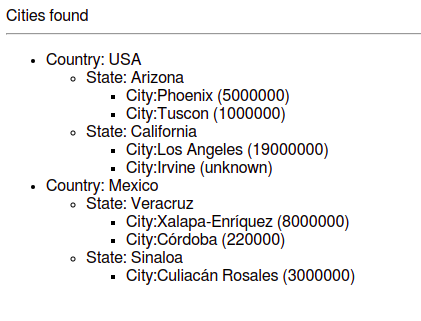 You can call Vely code from Javascript fetch() - this is the output from post.html (see Access application... on how to run it):

Install Vely - you can use standard packaging tools such as apt, dnf, pacman or zypper.

Because it is used in this example, you will need to install Nginx as a web server.

After installing Vely, turn on syntax highlighting in vim if you're using it:


Get the source code

The source code is a part of Vely installation. It is a good idea to create a separate source code directory for each application (and you can name it whatever you like). In this case, unpacking the source code will do that for you:

The very first step is to create an application. The application will be named "json", but you can name it anything (if you do that, change it everywhere). It's simple to do with vf:


This will create a new application home (which is "/var/lib/vv/json") and do the application setup for you. Mostly that means create various subdirectories in the home folder, and assign them privileges. In this case only current user (or the result of "whoami" Linux command) will own those directories with 0700 privileges; it means a secure setup.

Use vv utility to make the application:

To stop your application server:

This shows how to connect your application listening on a Unix socket (started with vf) to Nginx web server.

Step 1:
You will need to edit the Nginx configuration file. For Ubuntu and similar:


while on Fedora and other systems it might be at:

Add the following in the "server {}" section ("/json" is the application path (see request_URL) and "json" is your application name):

Use the following URL(s) to access your application server from a web client like browser (see request_URL). Use actual IP or web address instead of 127.0.0.1 if different:


Copy the contents of file cities.json (see under FILES) to a text area in the form.

Run from Javascript via fetch method
You can also test JSON parsing via Javascript/fetch mechanism. First, copy the file to your web server in a separate directory:

Note: if your server is on the Internet and it has a firewall, you may need to allow HTTP traffic - see ufw, firewall-cmd etc.

You are now done with the example! What follows are the source files in this project so you can examine how it works:

This is the JSON document that you enter in the form for parsing. It contains countries, states and cities along with their population.

You can call your Vely code from Javascript via fetch(). This HTML file will do that as soon as it loads (no buttons to push), you can of course change it to fit your needs. This also demonstrates the use of POST method with Content-Type of "application/json" to talk to your server-side Vely code.

This is a simple HTML form where you can enter JSON document. Since the code in json_process.vely and json_all.vely parses a list of cities as described, the text to enter is given in cities.json file.


Parse all JSON data in a loop (json_all.vely)

This parses the document that you may not know the structure of. Each data node is obtained you can examine it in your code.

Parse the JSON document. This shows parsing the document that you know a structure of, but does not have a fixed structure, so each element is retrieved based on its normalized name (see read-json).